Usually a few days before Silvester some people are already having big plans how to celebrate New Years and some others are still having no clue at all what they will do for New Years, such as us. Nhi is actually a person who is planning her whole life in advance, structure every step and is sometimes really not spontenous, while T. is the total opposite type. But this year everything seems to be impossible to plan, because life was just struggling with so many deadlines and work which didn’t leave us any time to think about New Years. 2016 was one of the years, which just flew away faster then a speeding bullet, literally.
So T. spontaneous decided to go to Zurich couple hours before we checked in at our Hotel which we booked while driving to the beautiful city on the 31st of December. What a surprise!
Zurich was never planned in Nhi’s travel goals for this year and still we made it here, very spontaneous and no clue what the city will bring us for Silvester.
We drove with the car only 2 hours to Zurich from where Nhi lives, no traffic and any stops.
We stayed in Zurich 2 nights and we think this is totally enough to see everything you should see and also to avert to go bust after this expensive trip haha. Really, this was one of the MOST expensive travels, but still an pleasant and memorable one. Arriving early at 10 am in Zürich we had still plenty time left to discover the city. Totally hungry we decided to check the first cafe/restaurant on Nhi’s favorite list: BEBEK
The location is super beautiful, a mix of industrial, artistic and retro-chic. It felt very nice to sit there, surrounded by all these cool alternative stylish people. Most of the people in Zurich were dressed very well with a young vibe of style. The food at Bebek was very good and served nicely. After our food, we took a nice trip with the tram to the old quarter of Zurich. The old quarter is very similar to some cities of Germany – small, narrow but very pretty. There were small alleys with many boutiques and cosy cafes in ever corner. That day was freezing cold but we still enjoyed our spontaneous sightseeing trip. We just walked around and by accident, we came across all nice sights of Zurich, like Lindenhof, Paradeplatz, St. Peterkirche, Fraumünster the Bürkliplatz of Zurich. In this city, you can see some nice churches if you are interested in this kind of architecture and culture. From the idyllic platform Lindenhof, located above the town you can get a pretty nice view of the Limmat. Coming down from the Bahnhofstraße (shopping street) you can enjoy a free view from the Bürkliplatz over the lake and the Alps. After walking around the whole day, taking tonnes of cool pictures we went into the city for some window shopping. The Bahnhofstrasse is very long, elaborately decorated with beautiful light-drops, which looks like a starry sky at night. Before heading back to the Hotel we got some Champagne and snacks to pop into the New Year 2017. For dinner we went to a restaurant in the city which was called, …. and enjoyed our red wines and typically Zurich food. Shortly before the Silvester Countdown we followed the crowd to the lake where the firework would start in a bit. The whole place was full of people, it’s been a long time we saw so many people on the street. That was an amazing feeling! The place was full of tents which served different drinks and food. It was a gathering of happy dancing and singing people who shared their last and first moments of the Year with their beloved ones. And even though the area was so crowded Nhi made it to the front of the crowd with the best view over the lake. Excited we were waiting for the firework which signifies the start of the new year 2017 with even more adventures, love, surprises and motivation!
Of course, this had to be celebrate and we bought some tickets to an exclusive Silvester party at “Kaufleuten” Club. The entrance tickets in Zurich are quite expensive – so if you want to celebrate in Zurich just bring a looooot of money with you, also the drinks are not cheap at all. The crowd was young and all in super good mood. And so we danced into the moonlight. Even with a little headache and tiredness we woke up early to check the other side of Zurich city. Today on the plan: Zurich West
This district that once witnessed the industrial revolution is today a focal point of gastronomy, art, design, dance, culture, shopping and architecture. It has earthiness of its industrial background and merged it with the glamour of the modern city so that it evokes a metropolitan feeling. This area is really like Berlin!
It was Sunday afternoon and still there were some cool electronic clubs open – the good load music was unmistakable. People were still partying into the new year – how freaking awesome!
The streets were full of nice artistic graffitis. We really liked this area and enjoyed everything about this district. For brunch, we chose Maison Blunt, a restaurant with an ambiance out of the 1001 Nights, with wonderfully fresh oriental dishes and mezze. We highly recommend you guys this place! After the yummy food, we went back to the river and took some amazing sunset photos with beautiful bubbles flying in the air. 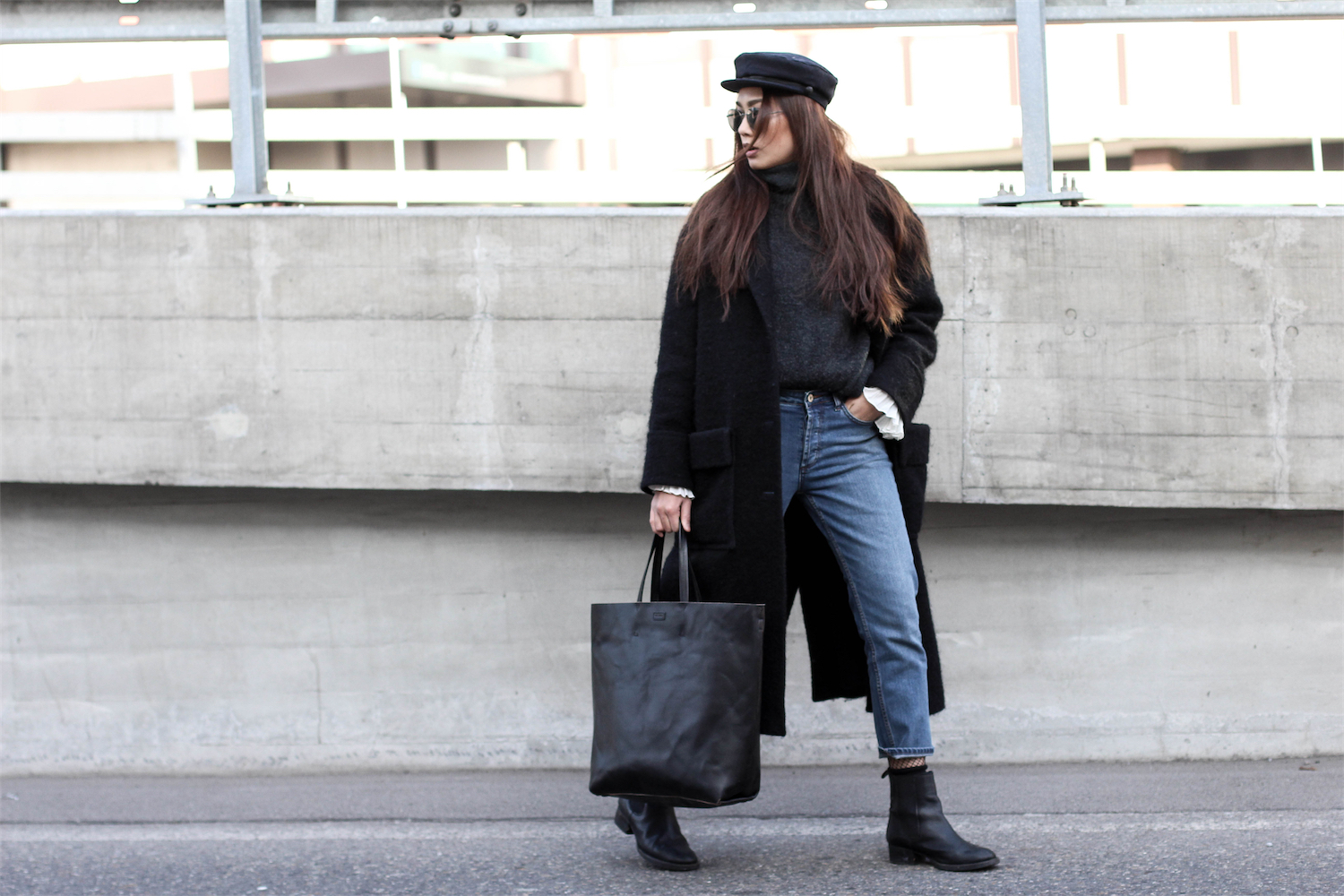 Denim Look with my O’Bag What a beautiful recap of your end of 2016 spontaneous trip. I enjoyed reading it! The pictures especially made me feel the vibe you were describing..thank you for giving me a peek into Zurich which seems to be a city that is exciting, alive and urban! Happy new year to you two love birds!! <3